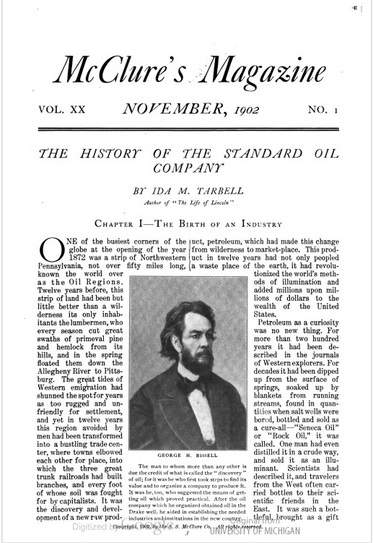 McClure's Magazine, a muckraking journal based in New York, focused on dealing with the social problems of the day. [1]

McClure’s Magazine was a monthly periodical based in New York and focused on printing well-researched articles as well as fiction. Though originally an unprofitable operation after its inception in 1894, McClure’s circulation was able to grow to a sizable amount by the 1900s and its owners were finally able to turn a profit [2]. McClure’s focus also shifted; although the magazine still published articles and fiction, it turned its writers’ efforts to writing about the social problems of the day because, according to S.S. McClure, “while fiction was still craved by the American reading public, the study and exposition of great problems has been found the most striking example of the fact that the truth… has not lost its popularity. [3]”


Ida Tarbell’s work in McClure’s began with a series on the life of Napoleon Bonaparte, followed by an autobiography on Abraham Lincoln [4]. Though these works were widely appreciated, it was The History of the Standard Oil Company that vaulted Ida Tarbell to the forefront of the muckraking scene. It was through her exposes on the Standard Oil Trust that Ms. Tarbell pioneered the art of investigative journalism. She slowly and methodically sifted through thousands of records to compile information on Standard’s business practices that allowed it to grow to such an enormous size. However, this was far from easy work. Standard Oil had preserved few documents and sometimes even went out of its way to destroy existing information [5]. One personal anecdote Ms. Tarbell gave was of her trying to find court documents that Henry D. Lloyd had referenced to in his book Wealth against Commonwealth. The documents were related to a suit that had been filed against Standard Oil for unfair practices. However, when Ms. Tarbell tried to look for said documents, she was unable to track down the original copies and it took her multiple weeks until she was finally able to procure a copy. These instances made her job writing The History of the Standard Oil Company a very arduous task. In fact, Huey Long – aka the “Kingfish” and ardent hater of Standard Oil – would also acknowledge the fact that Standard Oil was destroying evidence against them [6]. In a letter he wrote to Ida Tarbell, Huey asks for Ms. Tarbell’s help in securing documents against Standard Oil – undoubtedly for use in his upcoming run for the governor’s seat in Louisiana. Ms. Tarbell also had a personal grudge to settle against the practices of Standard Oil: her father’s small oil business had been driven out business by oppression from Standard Oil [7]. Writing The History of the Standard Oil Company was a method of retribution for Ida Tarbell.

Ms. Tarbell worked closely with her assistant, John Siddall, and her brother, W.W. Tarbell, in producing the History. In a letter she wrote to Mr. Siddall, Ida Tarbell details the secrecy of her project, calling the documents in her possession “very remarkable” and necessary to be kept “a dead secret [8].” W.W. Tarbell, who was also in the oil business, would later on have his own dealings with the Standard Oil Company, where he would testify about the efforts of Standard to force him out of business [9]. All around, Ida Tarbell was dealing with Standard Oil. 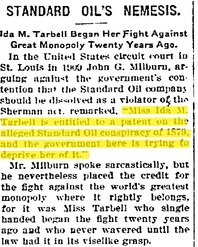 Some believed that Ida Tarbell alone was responsible for the destruction of the Standard Oil Trust. [7]
Her work would finally pay off in 1911, when the Supreme Court ruled that Standard Oil was an unfair combination and ordered the company to be broken up. There was no doubt that Ida Tarbell’s work had influenced the Court’s decision. John G. Millburn, a lawyer representing Standard Oil, sarcastically remarked, “Miss Ida M. Tarbell is entitled to a patent on the alleged Standard Oil conspiracy of 1879, and the government here is trying to deprive her of it [7].”

The Supreme Court decided that the Standard Oil Company was an unfair combination and came up with a plan to dissolve the huge oil trust. [10]
The dissolution of Standard Oil would have many implications on the United States, especially in technologically advanced states like New York. The Standard Oil Company would be broken up into many small companies such as South Penn Oil Co., Washington Oil Co., New York Transit Co., etc [10]. Each company would operate in different regions and the competition was returned to the oil market. In New York, Standard Oil was allowed to keep its name but would later on change and merge itself into the ExxonMobil Company. ExxonMobil nowadays is known as a “baby Standard” because even though it was broken up from the original Standard Oil Company, it still controls a massive amount of the oil market. In New York, many gas stations carry either the Exxon or the Mobil name.

Ms. Ida M. Tarbell’s work did much to advance the muckraking field. She stood out in the world of journalism because she was a well-educated woman and she had the know-how to stand against one of the largest trusts of the time – the Standard Oil Company. Her methodical and accurate writing style proved that she was a reliable source and raised awareness of the abuses Standard Oil was employing to gain an unfair advantage. From her humble roots as a writer for The Chautauquan to the celebrity status she gained with The History of the Standard Oil Company, Ida Tarbell worked continuously for the education and the betterment of her fellow American citizens.